Tips to Get You Moving This Winter 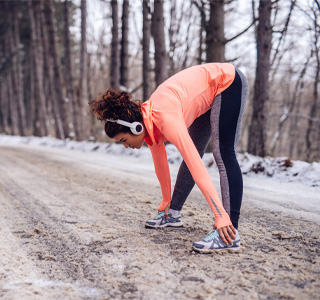 Tips to Get You Moving This Winter

Winter, in the Midwest especially, brings frigid weather, an abundance of snow, and the desire to stay curled up on the couch. It seems as though the cold front sweeps away motivation and any desire to leave the house. Despite the desire to get in your pajamas until March, working out in the winter is incredibly important for a variety of reasons.

Your body stores more fat in the winter

University of Colorado researchers followed a group of six men and 12 women in both summer and winter. They found that their production of ATLPL, a chemical that promotes fat storage, nearly doubled come winter and dropped during the summer. But don’t worry, you are not doomed to wearing sweaters year-round. Research shows that exercise may increase SMLPL, the muscle enzyme that promotes burning fat, which can offset the “sweatpants are all that fit me right now” effects of ATLPL. The researchers found that those who are normally physically active are more protected from weight gain associated with increased ATLPL production. Aim for at least 30 minutes of exercise on most days, whether its an early morning HIIT session, a spin class after work, or even building a snowman with your kids.

You hide under layers

Everyone knows winter is the season of oversized sweaters. But wearing loose-fitting clothes for a good portion of the year may stop us from realizing the weight we are putting on. If you are trying to lose weight, avoid baggier clothing so you can truly see the positive change in your body. If you are not one to give up your sweaters and find yourself wanting to go straight home after work, opt for those in red, pink, or bright blue. Mood research suggests those colors energize you and jolt your senses.

The sun sets and your cravings rise

Your carb cravings rise exponentially when the days get shorter. To stave off a late-night carb cravings, eat some healthy carbs in the afternoon before the sun goes down. Winter can trigger cravings for sweet, comforting carbs because diminished sunlight during the season makes serotonin in the brain less active. When your brain produces too little serotonin it can leave you feeling tired and hungry. Eating carbs causes your serotonin levels to rise, which can influence your craving them. Researchers found that those who craved carbohydrates and were diagnosed with seasonal affective disorder ate an additional 800 calories or more a day to satisfy their carb cravings. If you overindulge like that for five days in a row, you will gain a pound. To put yourself in a good mood during the dark days of winter, eat low-fat, healthy carbs, such as oatmeal, cinnamon toast, and sweet potatoes. Cravings tend to grow as the day goes on, so eat protein, vegetables, and dairy products for breakfast and lunch. Then, in the afternoon, have a low-fat carb snack, like cereal, soy crackers, or popcorn. For dinner, try roasted potatoes, vegetable stew with barley, whole-grain pasts, or black bean soup. Avoid eating a lot of lean protein, however, because it prevents serotonin from being produced. To amp up your serotonin production, spend at least 20 minutes a day outside or near a bright window.

Once you sit down on the couch, you can’t get back up

We all know if the first move we make when we get home is to sit on the couch, that is where we will remain for the rest of the night. So, instead of heading straight home and plopping, get your workout in first. Change directly from your workwear to your workout wear when you get home, or if you go straight to the gym after work, avoid the temptation of just driving home and calling it a night.

Dark mornings make it impossible to get out of bed

Waking up when it is still dark certainly puts your motivation to sleep. Darkness is a cue for your brain to start producing melatonin, the sleep-inducing chemical. Waking up on a dark, cold, winter morning is reminiscent of severe jet lag, but instead of lasting a few days it lasts a few months. If you are trying to fit in a workout before work, you cannot sleep through every morning. Instead of waiting for the sun to slowly start rising earlier, try going to bed 15 minutes earlier each week over the next four weeks. To ensure you fall asleep faster, set a reminder on your phone when its time to snooze and avoid using screens that emit blue light, like TVs and cell phones, for an hour before bedtime. The extra hour of solid sleep makes a huge difference in your morning mood. Researchers assessed 200 healthy sleepers and found that those who went to sleep at midnight were almost three times more likely to experience severe symptoms of depression compared to those who went to bed at 11 p.m.