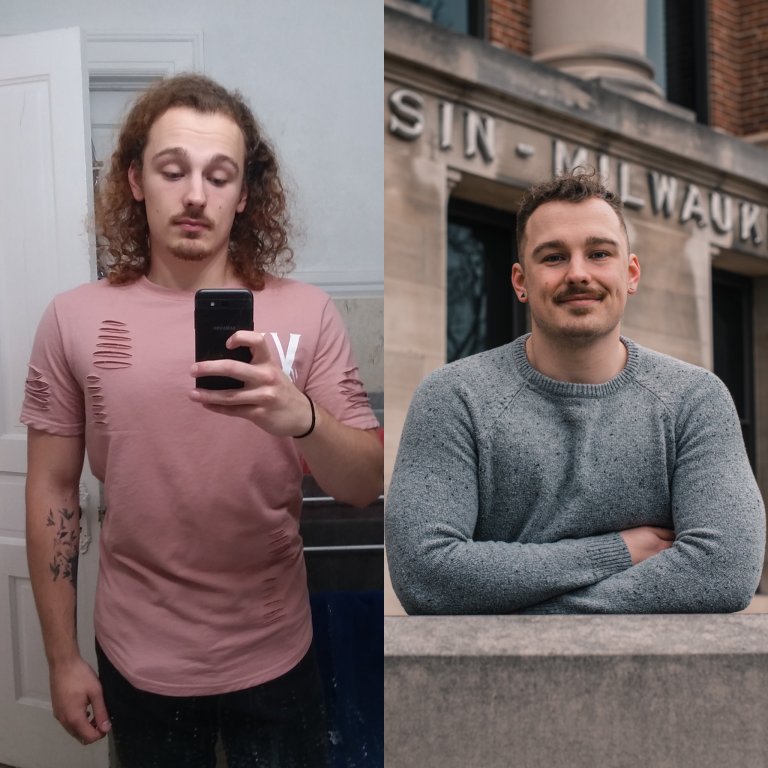 Everyone’s fitness success story is different. Some people lose 50 lbs. Others have no desire to lose weight and instead focus on getting stronger and actually gaining healthy weight. Thomas Madlon is in the latter group. After high school, Thomas lost his athletic physique and slimmed down 40 lbs. While some might find that kind of weight loss appealing, it isn’t ideal for someone who wanted to maintain a muscular build. Over the last few years, Thomas has built up muscles again and has regained 50 lbs.

“In college, I was doing jiu-jistu and kickboxing. I thought I would be able to diet down and possibly fight at 145lbs,” he told us. “I happened to weigh myself at the gym one day and I realized I already weighed 145. That was really eye-opening. I realized I also lost a lot of confidence with that size as well. I had a friend introduce me to bodybuilding and I dove in. “

As difficult as a weight loss journey can be, a weight-gain and body-building journey can be just as daunting and they don’t get as much praise as they should. The road was not an easy one, as Thomas said, “I wanted to quit many times. I had people laugh at me in the gym… I’ve had surgery on both of my shoulders. I wasn’t able to do many pressing exercises until last year because I would end up in pain or hurt. I made it a point that it was okay to fail, but I kept my head down and didn’t let myself give up.”

Thomas also credited Xperience Fitness with some of his success, saying, “Xperience offered a really affordable membership and equipment that similarly priced gyms just don’t have. I didn’t have to worry about a gym not having some machine I could actually use, or worry about spending all my savings on a gym membership.”

Perhaps most importantly, Thomas’ mental health has also been boosted by all of his hard work. “I feel stronger mentally, not just physically. Yes, I’m stronger in the gym, I like how I look and I have more energy now, but I’ve stuck to a plan for years, eating four, five, or six meals per day. I’ve lifted weights three, four, or five days per week. I know it’s not easy to keep up for years and I’m proud of myself for it.”

Going forward, Thomas plans to keep working with a friend of his to hold himself accountable. Read about the benefits of having a workout partner.

As for advice to others who are trying to accomplish their own goals, Thomas said, “Don’t overcomplicate it and stay consistent. Switch to whole foods; getting a food scale helps a lot. Stay hydrated and exercise four or five days per week. Doing those little things day after day will yield tremendous results over a few months.”

He also offered his guidance to anyone needing it and encouraged anyone to reach out to him on Instagram by sending him a message.