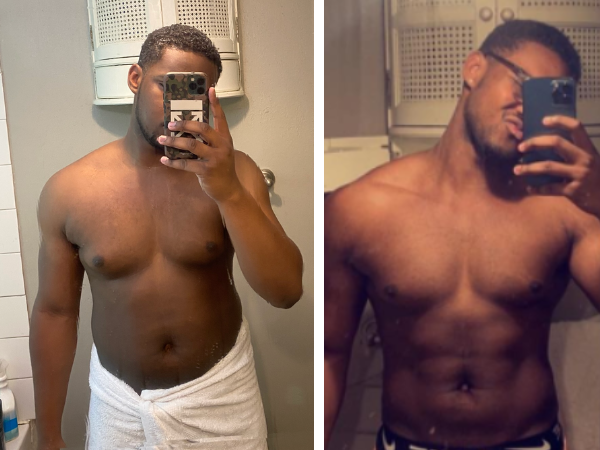 Whether you are trying to lose weight, gain muscle, or just live a healthier life in general, your fitness goals are worthy and commendable. Johnny Williams set out on his fitness journey in June of 2020. This is when his body fat percentage reached 35%, something he just was not satisfied with. Two years later, Johnny currently has a body fat percentage of 13% after losing 40 lbs. of fat and tacking on more than 30 lbs. of muscle.

What motivated Johnny was something many of us might find benign, but it can be hurtful to those who are unhappy with their physique. While out with friends for drinks and late-night appetizers, Johnny was casually referred to as the ‘fun fat friend.’  “Albeit, she was trying to be facetious,” Johnny told us. “But when she said it, I was floored. I had been relatively small most of my life and I hadn’t noticed that l gained weight through college and quarantine. At this moment, I decided to start going to the gym and I haven’t stopped since.”

The progress wasn’t smooth, though, as it rarely ever is. Johnny said, “At [around one year of working out] I expected myself to look like some sort of Instagram model, but I still looked like a fun thick friend. Although compliments and words of affirmation from friends and family were impactful, the photo from before I started was the real motivating factor that made me keep going.”

Little moments during a fitness journey can really make one realize the work they’ve put in has paid off. For Johnny, it was during a trip to Express and the saleswoman telling him he was a slim/small fit as opposed to the husky-large fit he had been. Johnny also said, “I recall calling my mother, making several social posts, and updating my dating apps to have “Gym” as an interest. I think I may have annoyed a couple friends, but I knew I had made good progress in the gym.”

Johnny has made tremendous strides in two years and is now living happier and more confident with himself. As for advice to those who may just be starting their own journey, Johnny said, “Fitness is the best addiction that (hopefully) never ends. So treat it as such. You will be happier, healthier, and more successful if you make it a lifestyle versus if you make a drastic cut.”

Get Your Roadmap To Weight Loss