Relieving Depression and Anxiety with Cryotherapy﻿ 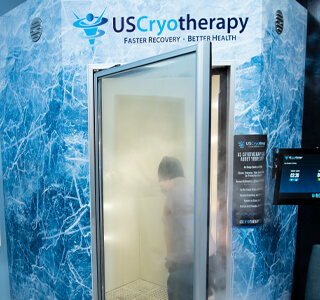 Relieving Depression and Anxiety with Cryotherapy

Mental illnesses are increasingly common around the world. And while common, they are severely undertreated.

According to the Anxiety and Depression Association of America, about 1 in 5 adults are affected by an anxiety disorder in the United States and Major Depressive Disorder is the leading cause of disability of those aged 15 to 44.3. The National Alliance on Mental Illness found that a staggering 60 percent of American adults, and almost half of children ages 8-15, receive no treatment for their mental health diagnosis.

A lack of treatment could be attributed to a number of things, the stigma that so often casts a shadow over mental health, limited disposable funds, a lack of access, insufficient knowledge about mental health in general, or the inability to recognize symptoms of mental illness, among a multitude of other possibilities.

While medication and exercise are commonly suggested and administered for treating mental health, there is another, more unknown, treatment option: cryotherapy.

The brain science behind anxiety and depression

Before getting into how cryotherapy relieves the symptoms of anxiety disorders and depression, the science behind these illnesses must be understood.

First, occasional anxiety is completely natural and a healthy response to uncertainty and danger, but consistent worry and nervousness may be a sign of a generalized anxiety order.

When confronting a dangerous situation, two brain circuits become active and relay information to different parts of the brain. The first circuit extends to the cerebral cortex, or the outermost part of the brain, which is used for thinking and decision making. The second circuit involves the amygdala, the part of the brain that is central to emotional processing. The amygdala monitors your body’s reaction to the environment and evaluates an event’s emotional response before, sometimes subconsciously, organizing the responses. While multiple brain circuits activate simultaneously, the amygdala initiates the fastest response to danger and communicates with the hypothalamus, prompting the release of hormones that raise your heart rate and blood pressure, tense the muscles, and ready the body to fight or flight. This entire system is activated before the cerebral cortex can even process what is happening.

With anxiety disorders, the amygdala has become so sensitive that it will overreact to situations that are not threatening, unintentionally triggering the brain circuits that produce an emergency stress response.

“Over time, anxiety becomes attached to situations, thoughts, and memories unrelated to genuine sources of danger. In this sense, the brain may inadvertently create its own fears,” Harvard Health Publishing explains.

First, sadness is an extremely normal human emotion, but sadness passes with time and can usually be linked to a trigger. Depression is a mental disorder with symptoms like feelings of discouragement, sadness, hopelessness, lack of motivation, and loss of interest in activities that were once enjoyable. If these symptoms last nearly every day, for most of the day, for over two weeks, a healthcare professional may diagnose the person with major depressive disorder.

Often, depression is said to be the result of a chemical imbalance in the brain, but it is much more complex than that. In short, depression is more than simply having too much or too little of certain brain chemicals. Depression could be caused by faulty mood regulation by the brain, genetic vulnerability, stressful life events, medications, and medical problems. This is not to say that chemicals are not involved, but it is more involved than levels of certain chemicals being too low or too high. While two people could exhibit the same signs of depression, their internal problems could be different, making a blanket treatment more difficult.

How does cryotherapy relieve these symptoms?

While there is not a quick long-term fix for mental illnesses, cryotherapy can provide relief as soon as the minutes-long session is over. The cold in the whole-body cryotherapy chamber stimulates the body’s nervous system, triggering the release of beneficial biochemicals such as endorphins, adrenaline, and oxytocin, among others. The release of these anti-anxiety hormones will result in an improved mood, in turn reducing depression symptoms, and lower anxiety levels.

A 2000 report found whole-body cryotherapy induced relaxation, mood elevation, memory enhancement, an improvement in vigor, a significant decrease in tension and fatigue, and a boost in energy levels. Another 2008 study found that whole-body cryotherapy reduced symptoms by at least 50 percent in about half of the participants with depression or anxiety. The participants were treated with 15 daily visits, for 2-3 minutes, with temperatures ranging between negative 110 and 160 degrees Celsius. A positive effect was observable after one week of treatment and improvements continued to be significant over the three-week treatment. The only significant difference between the study group and the control group was the level of education. While a significant decrease of at least 50 percent from the baseline severity of symptoms was observed in about half of the participants of the study group, only one case in the control group saw similar results.

The symptoms may have been reduced by the physiological hormonal responses triggered by cryotherapy, which includes the release of adrenaline, noradrenaline, and endorphins.

Whether you are looking for relief from mental or physical ailments or illnesses, cryotherapy can help.

Visit Xperience Fitness Woodbury, Coon Rapids, or Roseville for more information regarding cryotherapy. Cold is a powerful energy, use it to get your life back today.

If you believe you suffer from an anxiety disorder or depression, consult with your doctor for information on all treatment options.